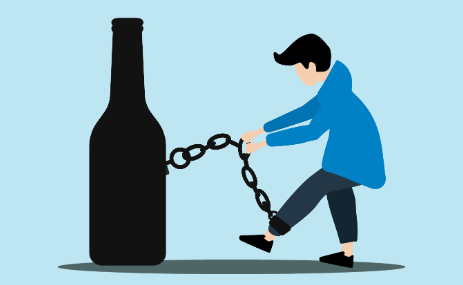 Alcohols are formed when a hydrogen atom in an aliphatic hydrocarbon is replaced by a –OH group. These classes of compounds have numerous applications in both industry and everyday life. For example, have you ever noticed that ordinary spirit used for polishing wooden furniture is primarily a hydroxyl-containing compound, ethanol? Sugar, the cotton used in fabrics, and paper used for writing are all composed of compounds containing –OH groups.

Reaction with metals: Ethanol reacts with active metals such as sodium, potassium and aluminium to yield corresponding alkoxides and hydrogen.

Where R can be any alkyl or aryl group.

Dehydration: When ethanol is treated with a protic acid, such as concentrated H2SO4 or H3PO4, or a catalyst, such as alumina or anhydrous zinc chloride, it undergoes dehydration (the removal of a molecule of water) to form alkenes.

The above reaction takes place at 443 K.

Oxidation: The formation of a carbon-oxygen double bond with cleavage of an O-H and C-H bond occurs during the oxidation reactions of ethanol. These reactions are also known as dehydrogenation reactions because they involve the removal of dihydrogen from an ethanol molecule.

a) Strong oxidising agents, such as acidified potassium permanganate, are used to directly extract ethanoic acid from ethanol.

b) CrO3 in anhydrous medium is used as the oxidising agent for the isolation of ethanal from ethanol.

c) A better reagent for oxidation of ethanol to ethanal in good yield is pyridinium chlorochromate (PCC), a                   complex of chromium trioxide with pyridine and HCl.

Propanol is a primary alcohol that ranks third out of the first four aliphatic alcohols. Propanol is a colourless liquid that dissolves completely in water. Propanol is another alcohol family member with three carbon atoms and a hydroxyl group in its chemical structure. Propanol is available in two isomers: n-propanol and isopropanol. Propanol is a better alternative fuel than methanol and ethanol in some ways, including lower corrosive risks, a higher calorific value, and a higher cetane number due to its higher carbon structure.

Due to its miscibility, high flammability, and effects on the human body, propanol has a wide range of applications.

Propanol is commonly used as a solvent or in the production of other solvents, such as antifreeze, soaps, lacquer formulations, dye solutions, window cleaning agents, and other materials.

Propanol is used in a variety of pharmaceuticals. Propanol is the main component of rubbing alcohol bottles. It also serves as an antiseptic. Propanol can be found in hand sanitisers in the form of solutions or wipes. Furthermore, propanol is frequently used in inhalant products in place of ethanol, particularly in nebulisers.

The Best Time to Invest in Cypriot Property

The Ultimate Checklist For Selecting The Best Web Design Company